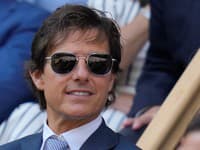 American actor Tom Cruise has been in the premier league for years, so many people assume certain mannerisms from him. However, he generally seems very relaxed in public and friendly with his fans. It was no different a few days ago when he filmed a scene for his new movie Mission: Impossible 7 in the Lake District National Park.

Coincidentally, Sarah and Jason Haygarth were also hiking in the mountains at this time. As they explained to Extra TV, they are trying to climb all 214 peaks in the national park and were on their 134th ascent when they realized something was different this time around. “There were helicopters at the lake all morning,” said Jason, who said he immediately thought they must be filming something there. However, he never imagined who he would meet in this remote place in the middle of nature.

“At the end of the hike, we saw a helicopter coming down the gorge and people jumping out of it. We realized they were cameramen. When we got to the top, a production guy stopped us and said that we couldn’t go any further because a helicopter was going to land there.” So the tourists waited a while for it to take off and wanted to continue. However, they suddenly noticed someone riding in a glider not far from them. It was Tom Cruise!

Tom Cruise during the filming of Mission: Impossible in the Lake District
Source: Profimedia

The Hollywood star reportedly even apologized to the shocked couple: “I’m sorry, I know we ruined your walk with the noise.” As revealed by Sara, Cruise also told them that they have a nice dog and when asked what he was doing there, he replied that he is about to jump off a cliff. A minute later, he ran shouting, “See you later!” The lucky Englishmen saw with their own eyes that the actor does not use stuntmen, and even the shooting of Hollywood blockbusters can sometimes be done without much noise. After all, there was no one there, just Jason, Sarah, their dog, a few production people and – Tom Cruise.

Thomas Cruise Mapother IV. was born on July 3, 1962 in the American city of Syracuse. At the age of 14, he enrolled in a Franciscan seminary with the idea of ​​becoming a priest, but left after a year. Instead, he decided to launch his acting career in New York and did well. In over 40 years he has starred in films such as Top Gun, The Color of Money, Rain Man, A Few Right Guys, Interview with the Vampire, Mission: Impossible, Minority Report, The Last Samurai and Collateral. He was nominated for an Oscar for Born on the 4th of July, Jerry Maguire and Magnolia. In May this year, the actor returned to the limelight thanks to the film Top Gun: Maverick, which received positive reviews from both lay and professional audiences.