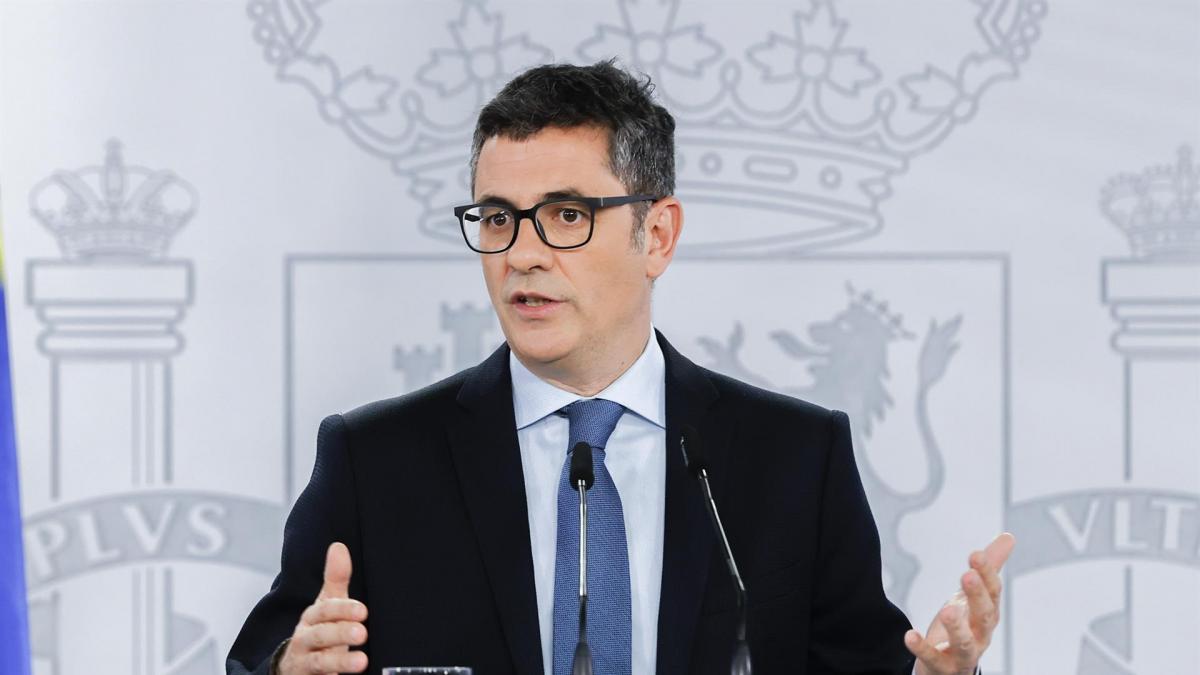 The new law on secrecy, the draft of which was approved this Monday by the Council of Ministers, will not entail automatic declassification of documents already classified and have met their deadlines, but it will be done gradually if they decide so “of their own motion ‘ the competent authorities or at the request of data subjects who request it.

This was stated by the Minister of the Presidency, Félix Bolaños, at the press conference following the meeting of the Council of Ministers, where he reported on the details of this draft, on which the consultative bodies now have to give their opinion.

The draft of the socialist wing of the executive provides for a transitional arrangement of application. First, it won’t come into force until six months after it’s approved by the Cortes, which the government counts as early 2023. With regard to “huge” documentation already classified or previously classified, the principle is to remain as it is, although it may be released by the competent authorities “ex officio” or at the request of any person with an interest.

No special protection for the crown

According to Bolaños, the general rule will be to “allow declassification” unless it compromises the security, defense of the state, or the integrity of a specific individual. At this point he recalled that the military documents before 1968 were already declassified by the Ministry of Defense at that time.

In addition, the minister explained that the new regulations do not impose any particular restrictions on certain institutions, ie documents related to the Crown, for example, do not enjoy special protection.

The minister stressed that this is a “progressive and guaranteeing” law that replaces the current Francoist law and homologates Spain with the “best standards” of advanced democracies in this area. “It was an open issue,” he commented, making it clear that henceforth national security and defense “balanced with citizens’ right to information” would be guaranteed.

The future law provides for four categories of classification: Top Secret, Secret, Confidential and Restricted. The classification of the documents contained in the first two will be according to the Council of Ministers, while those of the other two will be left to a list of authorities ranging from ministers to secretaries of state, undersecretaries of state, government delegates or the highest, among others, officials of the National Intelligence Center (CNI) , the police or the Guardia Civil.

On the other hand, under the text of the new regulation, information may be classified based on specific or foreseeable future events, such as the end of a war or the death of a person.

From the entry into force of the law, the maximum period of confidentiality of information is 65 years. Specifically, a term of 50 years has been set for the Top Secret, which can be extended by a further 15 years; the secret will be for 40, plus 10 overtime; the confidential, between 7 and 10 years; and the restricted between 4 and 6.

Once the maximum deadlines have been met, they must be released automatically, although the deadlines initially set may be reviewed by the authority that has once classified the information if it believes it can be released sooner. “There is no way that something can be kept secret for life,” the minister noted, noting that “normal” when the information “does not affect the security of the state or the protection or integrity of any person,” is anticipated could “The airing of the secret.

Bolaños has described these deadlines as “reasonable”, noting that there are countries in Europe that do not set a deadline for the publication of this type of document, such as Denmark, France, Italy or Belgium. He also reminded that in Sweden, for example, the period of protection for documents of all categories is set at 70 years and in Germany at 30 years.

The new standard will create what is known as the National Classified Information Authority, which is dependent on the Ministry of the Presidency and is similar to that working in other countries. This body deals with information classified as top secret, secret or confidential, as well as information originating from other states. In addition, it will have advisory roles to the government to ensure uniform criteria are established across the administration and will assess the suitability of those who have access to classified information.

Appeal to the Supreme Court

Another novelty will be that, for the first time, a person directly concerned will be able to request the declassification of a document, and if their request is not granted, they can appeal to the Third Chamber (the administrative judiciary) to the Supreme Court, which is also responsible for the decision jurisdiction if a request for declassification is part of a judicial proceeding.

The rule also regulates access to classified information by the lawmakers, who are part of Congress’s Reserved Expenses Commission – known as the Official Secrets Commission – which will be the body responsible for “channelling” requests for declassification that honor you make. If so decided, they may be granted access to it within the framework of this commission.