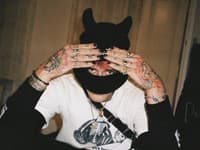 The Czech portal eXtra.cz reported the unpleasant incident. This was answered by a reader who saw the whole situation with their own eyes. It happened on a train trip. “As I entered, I noticed a young man with tattoos in the dining car, who was clearly under the influence of drugs,” described the situation, the source, who immediately recognized rapper Vercetti in him. And he was really disgusted by her behavior.

“He broke bottles, shouted, verbally attacked his co-passengers, it even degenerated to the point where he attacked a co-passenger who ended up in the custody of doctors”, shocks the reader. The train then stopped in Prague at Libni, where the set waited about half an hour for the arrival of the ambulance and the police. “Vercetti was arrested at a nearby hypermarket, where police restricted his personal freedom,” the source added.

The incident was confirmed by Czech Railways, Prague ambulance and police. “We can confirm that on Sunday in Prague-Libni there was an intervention by the PČR to train 114. The train was delayed for 24 minutes due to the intervention,” confirmed the Czech Railways spokesman Petr Šťáhlavský for the aforementioned portal.

“At 7:30 p.m. on Sunday evening, we received information from the train driver that two men had been assaulted. We were taking a 35-year-old man from Praha-Libeň station to Bulovka hospital for central admission. C It was a minor injury,” said Jana Poštová, spokeswoman for the Prague emergency services.

The police even revealed that the two men – both the rapper and the assaulted passenger – were under the influence of alcohol. “There was a verbal and then physical assault between two men, both of whom were given a breathalyzer test, both of whom tested positive with a result over one percent alcohol. Police documented the entire event and is currently reviewing the case and will determine the legal qualifications,” said Richard Hrdina of Prague police.

It is possible that in addition to alcohol, in this case, they also ruled out psychological problems, which Dominik admitted in the past. “I have a split personality, bipolarity,” the young Czech man said and continued, “I have anxiety, I don’t trust people, how many times a day do I have when I close blinds, turn off the phone and don’t communicate with anyone. I’m not afraid to say it.

A well-known Czech ATTACKED a passenger on the train: The drunk broke bottles, shouted… The POLICE had to intervene!