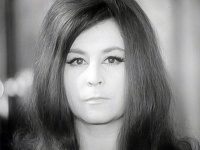 Eva Olmerová was born on January 21, 1934. She came from a supposedly good family, her grandfather was a diplomat. She was an only child, took piano lessons, played table tennis, rode horseback and swam competitively.

The romance ended in February 1948, when the parents separated and agreed that Eva would stay with her father. He brought home younger partners and eventually married one. In education, he applies the ordinances and prohibitions.

He even beat his daughter, which he later regretted. Her late arrival was caused by the police detaining her and not allowing her to call home. According to the Czech Reflex, she was stripped naked during the interrogation. She was only 17 years old. All the humiliation was related to his grandfather, who lived in Britain. They wanted her to report on him. She refused and had several conflicts with security.

She started singing at the age of 16, performing in wine bars and with an orchestra. Later it became part of the Semafor Theater. She won the Hledáme pisničku singing competition for weekdays, then had a big hit Čeka tiše. Thereafter, success was followed by further downfalls.

They forbade her to work with Ella Fitzgerald, she couldn’t travel, but she couldn’t even act. Over time, she started drinking and that was another reason no one wanted to hire her. She died on August 10, 1993 of cirrhosis of the liver. She didn’t even live to be 60.

Harsh State Police Practices: The 17-year-old singer was stripped and…