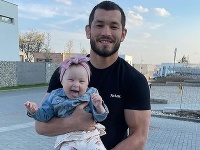 Makhmud Muradov proudly represented his native Uzbekistan, but also the Czech Republic, which was his second home, in MMA matches for 12 years. However, the Czech authorities have recently decided that they no longer want professional wrestlers in the country. They revoked his visa and said he posed a danger to the state and the public.

“Yes, unfortunately it’s true. They canceled my visa for Europe,” Makhmud confirmed to eXtra.cz. However, the problem is that the fighter has a large part of his life associated with the Czech Republic. Not only does he have working ties to the country, but most importantly – his two-year-old daughter Rumia lives there. Now he can’t see her at all, because without a visa he can’t even enter our neighbors or all of Europe.

“The decision not to grant a residence permit also does not affect the person’s ability to apply for a residence permit in another EU country,” Malá said. This means that currently the easiest solution for Muradov to see his daughter as soon as possible is to apply for a visa for another EU country. It would then suffice for Monika and her daughter to cross the borders of the Czech Republic and the family could be reunited again. However, the question remains whether the same reason as in the Czech Republic will be an obstacle to obtaining this permit.

What could the mentioned “danger” that Makhmoud had to pack his bags refer to? “In general, the law on the stay of foreigners establishes the grounds for not granting a residence permit in this area, such as: “reasonable danger that the foreigner may threaten the security of the state during his stay on the territory, seriously disrupt public order or endanger the international relations of the Czech Republic,” Malá said.

“The law is a general standard, therefore individual cases are assessed individually based on the facts discovered by the security forces of the Czech Republic, which were revealed in the investigation in question,” she concluded.

ENTRY BAN to the Czech Republic for Bagárová EX Muradova: Statement of the Ministry… Because of THAT, she is dangerous for the country!