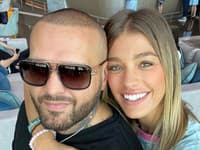 Joj TV viewers have something to look forward to again. The 10th jubilee edition of the popular show “Czech Slovakia has talent” will already be on the screens from September. And they announce several changes to Koliba. They did not participate in the position of moderators – Jasmina Alagič Vrbovská and her Czech colleague David Gránsky will also accompany the project this time.

But as Jojka reported today, she’s cooking up a huge surprise in part one. Instead of four fixed judges, one member will change in each game. And this one will be the husband of the presenter of Talent – Patrik Rytmus Vrbovský.

“In the tenth year of the jubilee of Czech Slovakia has talent, you can expect many novelties. One of them is the participation of special judges. We will tell you the first of them, Patrik Rytmus Vrbovský will be a member of the jury for the new series,” read the announcement on TV Joj’s Facebook profile. And an avalanche of comments was immediately triggered under the post.

Fan reactions were quick and really different. “It’s starting to look like nepotism. Well we’ll see, or maybe we’d rather not,” one viewer wrote below the photo. But supportive comments also appeared on the new judge’s address. “Rytmus – Patrik, you are the only one on the jury who is exceptional for telling the truth about talent,” another commented.

Well, some love it and some hate it. As they say – a hundred people, a hundred tastes. We’ll see how Rytmus shuffles the cards and what it brings with it. Anyway, the preparations for this magnificent project full of talents are already in full swing. It will really be something to see!

A shocking CHANGE in Talent’s 10th year: Jasmina as presenter and… Lucrative JOB for Rytmus!