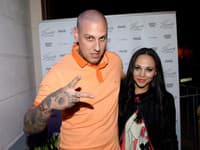 It’s been over a year since Separ, 35, and dancer Cynthia, 22, stopped hiding their romance and publicly confirmed their relationship, saying they were officially a couple. At that time, however, few believed the couple would last. The main reason was the big age difference. And although this factor came to the public as a reason for the collapse of the relationship, they took advantage of it.

The rapper calls his younger half an “energy charger”, she in turn appreciates his look and the fact that he taught her a lot thanks to the age difference. And currently, Separ has done what it rarely did before. He publicly confessed to his beloved and even openly wrote that she gives him something that no other woman can. And apparently not even his ex Tina.

“We were getting garbage that I had a second puberty and that she’s a gold digger, that the relationship can’t last, that she’s a kid (especially you Czechs are terribly mature) and bullshit similar…” the rapper wrote on Instagram, immediately pointing out Cynthia’s greatest strengths and why he loves her.

“But the truth is, I’ve never received more love from anyone than her and I get along with her like few others…I love you for who you are, and I wish all the best in the world,” he added in the post. Well, as expected, the comments under the love photo literally opened.

It also turned out that he liked Tina too. However, Separ responded to the remark just as openly. “It’s completely normal for people to stop feeling the way they feel for someone after years. Nowhere is it written that someone has to be together forever and nothing can be done. But if you don’t live in the moment and think shit, you won’t experience love in your life,” the rapper replied to the hater.

Rapper Separ CONFESSED HIS LOVE TO A YOUNG FRIEND: IT MIGHT HURT Tina… He also expressed his feelings for her!