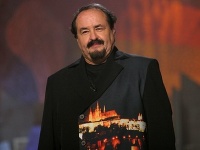 Petr Novotný was born on August 6, 1947 in Olomouc. He studied at the Faculty of Arts of Charles University in Prague. He first started hosting as a presenter for the music group Greenhorns. After that he worked for many years as a speaker for the music group Fešáci, with whom he still works today.

Over time, he became a sought-after vaudeville performer. He is characterized by simple humor and exaggerated facial expressions. He is a five-time winner of TV Entertainment Personality of the Year in the poll for the most popular TV face and screen program TýTý.

He also worked as a producer. His biggest production event was probably the mega-concert Nedvědi na Strahov, i.e. the concert of brothers Jan and František Nedvěd and their guests at the Prague stadium, which was watched by around 70,000 spectators on June 21, 1996. He has his own publishing and art agency 6P, which represents a number of well-known and popular personalities.

Petr Novotný was also known as a great cook. Among his hobbies were travelling. He collected information and stories about his travels, which he later published in books. He has many travel and cookery books to his credit.

However, since October 2013, the ever-optimistic Novotný has suffered from various health problems. He overcame a stroke and three years later his kidneys failed. Then his body had to deal with a difficult heart operation.

In early 2018, they even had to put him on artificial sleep for 60 hours due to his failing body. Later, his organs started working, but it turned out that he would need prostate surgery. However, anesthesia would be a big risk to his body.

After all these difficulties, it is not surprising that the artist now spends time more or less only in the circle of his family. However, since he is celebrating his jubilee, friends from the Fešáci band visited him a few days ago. “I didn’t even believe that his 75. I will live until my birthday,” Novotný told Aha! “I’m a retired comedian, at least I try to trash every day. I’m happy with my grandkids,” he added.

Petr Novotný with Jiřina Bohdalová and her granddaughters in June 2022
Source: Instagram PN