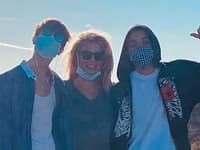 Britney Spears is currently in conflict with her ex-husband Kevin Federlin. The argument started after Kevin said that their sons did not want to meet the singer, for example, because of the way she presents herself on the Instagram social network.

The singer later accused her ex-husband of raising their children in a house full of marijuana. He didn’t hesitate for long and decided to post shocking videos that capture the singer’s very strange behavior towards her sons.

VIDEO: Kevin Federline has posted videos his sons secretly recorded when they were with their mother Britney. Click the arrow to the right to start another video.

“I can’t sit idly by as he attacks my sons after what they have been through. Even though it hurts a lot, as a family we have decided to release the videos the boys made when they were 11 and 12. This is far from the worst of the whole situation. The lies need to stop. Hope my boys grow into something better,” Kevin captioned the videos.

They show how Britney scolds her sons for their behavior. At the same time, she wasn’t afraid to use even the sharpest swearwords. The first video captures the boys in their bedroom. When their mother came to them, they tried to explain to her that they were going to sleep. This annoyed her and she told them in a raised voice: “This is my house! When I want to enter your room, I will come here. Finally start to respect me, is that clear to you? You should treat me like a worthy woman. I’m a woman, okay? Be nice to me,” Britney told her kids.

In the next video, she used even harsher words. “You are crazy ?” shouted the singer. One of his sons asked him the same question, just without the profanity. “I care about you, but I’m shocked. I’m shocked by you. And I don’t know what to do, because I’m scared of you. You’re weird because you’re going through puberty,” he said. replied the singer.

SHOCKING behavior of Britney Spears: Her sons SECRETLY RECORDED her!