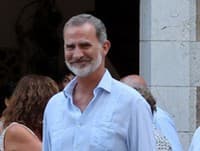 King Philip VI. and Queen Letizia chose the magnificent Charterhouse of Valldemossa as one of their holiday destinations. During the visit, they gladly took pictures and spread smiles in all directions. They were accompanied by their beautiful daughters – Leonor, 16, and Sofia, a year younger.

Accompanied by Princess Leonor and Sofia, the noble couple visited the historic complex, followed by a walk through the streets of Valldemossa, then together they went to a pastry shop.

Queen Letizia wore a green print sleeveless blouse and midi skirt by Spanish designer Pablo Erroz. The Ikat print is characteristic of Mallorca and the cotton skirt has been created by hand in local workshops. Leonor and Sofia appeared to the public in sundresses that only emphasized their beauty.

The former journalist and TV presenter is the first unborn Spanish queen. Due to her single status and the fact that she was divorced, she first met her husband in secret. Today, she is the dominant figure in the Spanish royal family and her beauty attracts attention wherever she appears.

The King of Spain already has TEENAGE GIRLS at home: Ah, they are becoming BEAUTIFUL!